I am so excited to share the launch of a new website by my dear friend Micael “Rabbit” Chadwick.  It’s called Roux for You and you can get there by clicking Roux4U or putting roux4u.com in your browser.  If you could use a smile and giggle, head on over to the website and check it out.  He’s even got a short, fun video so you can see how Roux is created.  It’s okay, go now, I’ll be here waiting for you to get back.  If you forget how to get back here, don’t worry, just stay over there…..it’s way more fun! 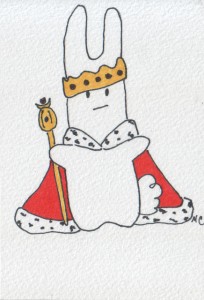 “Roux for You (Roux4U) is the brainchild of an idea sparked in the brilliant mind of my good friend, Nik.  My Roux character has long been a fan favorite by many.  This became a way for everyone to have their own Roux in their own way.

Each piece is hand drawn by me to your specifications – whatever you’d like Roux to do for you – on heavyweight 4″x6″ watercolor paper, and mailed to your door.  There are no prints.  There are no copies.  Each piece is a one of a kind original.  Scans of each piece will be posted on the website along with your name so you can easily find them and share them with your friends and family.” 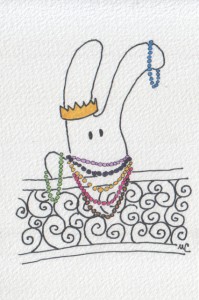 I’ve written about Rabbit several times here at Jotter Girl and if you’ve read any of the posts, you’ll know that he is a very special person.  Extremely creative, funny and genuine.  He has been an inspiration to me creatively but more important, it is his strength as a human being as he lives with HIV/AIDS that makes him quite remarkable.  This endeavor called Roux for You is a way for him to generate an income from home, which will in turn help pay for the medicine he needs.  A portion of each purchase price goes to HIV/AIDS Research and Awareness! 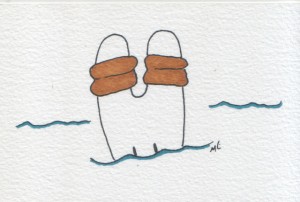 I for one, plan to give a Roux to all the special people in my life for their birthday’s this year.  So much better than buying a mass produced greeting card.

In my life, I have been fortunate to have my path crossed by some amazing people.  I attribute this to the fact that my sense of attraction to people is not boxed in by what I know, who I am or even who I’ve been told I am.

If I feel a connection, I have never shied away because of differences.  Our “common ground” may only be the internal feeling of connection – which on its own can be enough.  Trust and feelings are my guide and rarely does logic enter the equation.  Sometimes this has gotten the best of me, but mostly I am grateful for it allowing the unique people it has to enter my life.

This is absolutely how I became friends with Rabbit.  On paper, we have very little in common, but from the start, I felt a connection which over time has grown into a lovely friendship. 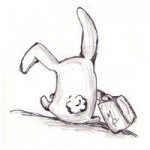 Rabbit is a 35 year old man who thus far, has lived a very full creative life.  Performing, writing and painting are just a few of his accomplishments and each category is filled with a very colorful history ranging from dark to light.  I have only read or heard bits and pieces, but can assure you that Rabbit has really lived the best and the worst of what life can dish out.

I came to know Rabbit shortly after he was first diagnosed.

Being HIV+ with Aids, I have seen Rabbit write over the last year that he is dying.

I have read his words telling that he has lived a full life.

I think of his life and the isolation this illness has brought him.

I look at him creating every day.  EVERY DAY.

In my last post, I thanked Rabbit for inspiring me to move forward with my painting titled, Ivy, which had been sitting unfinished for several years.  I had been watching him produce art piece after art piece and one day it occurred to me that he was quite possibly painting his legacy and doing so on limited time.  Maybe I was wrong and I certainly would never ask, but just thinking of the possibility made me realize how much time I had wasted not painting over the last 5 years.  For me, my artwork and writing will be my legacy so what was I waiting for?  I could be gone without a moments notice and leaving behind unfinished art couldn’t be part of the plan.  For years, the biggest part of how I identified myself had been pushed aside for other things.  Finishing Ivy has restored my artistic identity and I will always be grateful to Rabbit for this gift which he didn’t even know he was giving me.

I noted in my last post that we had been working on an interview.  I am very proud to share this with you and hope you will see the treasure I have found in Rabbit.   My questions are in bold italic and Rabbit’s answers are in roman type.  I have interspersed some of Rabbit’s creations within the text. 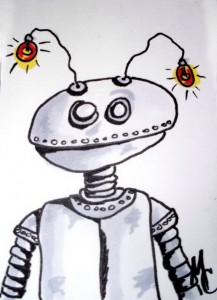 Where did the name Rabbit come from?

Oh… what’s in a name?  Rabbit comes from so many places.  I think it all began with “Silly Rabbit” years ago – then there is the white rabbit from Wonderland:  always discombobulated and all over the place running here and there.  And, of course, Tori Amos.  Listen to the very end of Cornflake Girl.  I can never find my keys – so much so that I don’t even HAVE keys anymore.

Being an artist, when did you have that moment of realization that you were good at it.

I don’t ever recall it occurring to me that I wasn’t good at it.  I remember my grandmother encouraging me for as long as I can remember.  Then in school, I was always doted upon for my artistic endeavors.  It was not until I became an adult that I realized that perhaps you could totally suck at “being an artist.”  The catch was, though, by that point, I wasn’t being an artist. I WAS an artist.  So it didn’t make a whole mess of never mind by then.

Were you a writer first or a painter/drawer?

Really, they both went hand in hand.  When I was young, I wrote and illustrated my own stories.  They are married to one another.  I don’t know that there was ever one without the other.

How has being color blind affected your creativity?

Again, this is one that people think would be a disability, but I have never known any different.  So it’s not like one day I had something taken away that could be crippling.  I have been colorblind my entire life – as was my grandfather – so it’s the only world I have known.  In many ways it’s an advantage – I see shades and tones and layers of color much differently than most people, so I work with what works in harmony as far as color goes without being hung up on “Oh, that is blue so it has to be blue.”  I go by instinct and intuition.  It made me one of the best makeup artist and hair colorist around when I was still in that profession.  It can get hanky sometimes when trying to paint realism – sometimes we end up with purple water and orange grass – but it’s just art.  And it looks fine to me.

What do you think is important for people to know about you?

I have THE WORST self esteem imaginable.  I fake it well.  (I don’t know that it’s important, really, but people always seem so struck with the fact.  Useless trivia.)

Fussy – Chaotic – Reserved (or Guarded) – Humorous – (Too) Giving (or Forgiving)

I’ll let you read between those lines… 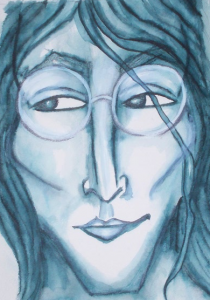 When was the happiest time in your life?

I’d like to think that, perhaps, that moment hasn’t yet happened.  There are so many happy moments.  I just look forward to the next in anticipation that it will be even better than the last.

What has been your biggest disappointment in life?

We all have disappointments daily.  The trick is to not dwell on them.  Learn the lessons offered and move on.  It all leads to this moment and what you carry with you into the next.  I have been disappointed, but I don’t want to give it a name and give it power.  Without disappointments, we wouldn’t have joys.

How long have you been HIV+ and do you have AIDS?

I learned I was HIV poz on June 6th of 2010.  Found out I had AIDS shortly thereafter on June 20th, but it’s suspected, because of how dead I almost was, that I have probably been positive for about ten years or so.

How do you manage the costs of medical care and medicine?

I don’t.  I am now on disability, but because of that I do not qualify for Medicare for the first 24 months – and because of it, I am ineligible for Medicaid.  So I currently have absolutely no insurance.  I have not been to the doctor since last year.  I just manage as well as I can.  When I was still on Medicaid, I stockpiled medications, which is what I am living on now.  When that runs out, I don’t know what I will do.  Bide my time, I guess…

How do you feel writing your blog has helped you over the last year?

I think in many ways it’s kept me sane.  It’s given me something to do.  Something to love.  Something  to hate.  It’s been a sounding board and a dumping ground when I have not had anyone else to talk to.  I know it’s been all over the place – extremely all over the place – but when you are as isolated as I tend to be, you’d be amazed at the shit that falls out of your head.  It’s messy and glorious and terrifying and exciting all in the space of one sentence… 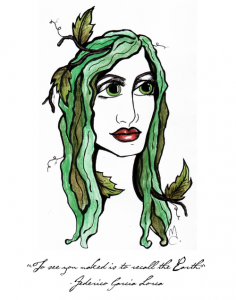 If you could meet anyone in the world, who would it be?

I would love to have met Van Gogh.  He would probably think I was a crazed nutbag as I am sure a huge fan of his – but he intrigues me.  He never knew commercial success during his life time – but still he painted and painted and painted.  There is such an authenticity to his work that is rare in art.  I would love to have a conversation with him and find out if his tick echoes mine.  I suspect we would have been quite similar creatures.

What is your proudest accomplishment?

Being someone I would be glad to know is I think what I am most proud of.  Being an inspiration to others.  I don’t measure successes like most people, I don’t think.  It’s not about what I have done – what I have gained – but more about who I am as a person and the mark that I leave on the world when my time is through. 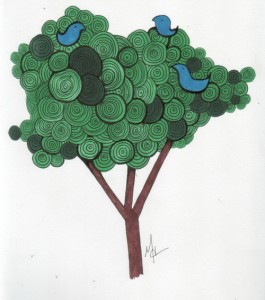 And that my friends is Rabbit.  If you would like to follow his career, you can find him by clicking here.  He is an artist, a sassy mouthed writer, a beautiful poet, a painter and someone that I am extremely proud to call my friend……but most of all he is quite unforgettable.