Thank you for thinking of me and sending me the almost life sized catalog featuring 48 year old Demi Moore.  It really came in handy this weekend when I changed the trucks and wheels on my son’s skateboard.   You see, I didn’t have any newspaper to put down and your mailing fit the bill perfectly.  I was able to dismantle the whole skate board without getting a speck of rust or dirt on my kitchen table.

As I looked down at my boy’s beat up skate board laying over Demi’s overly airbrushed image, I had the following thought.  In the skateboarding world, if your deck is perfectly painted, it means that you have never attempted much of anything and you just own a pretty skateboard.  When you see a deck like my son’s, you know he has spend hours mastering ollies,  heel flips and pop shove-its.  He’s challenged himself, fallen and often times succeeded.  In other words, he has lived and his board tells his story. 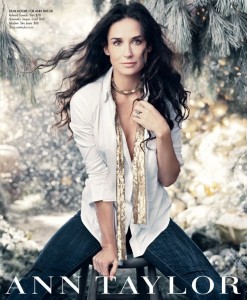 When I look at Demi’s face, I don’t see any trace of a life lived.

As a consumer, truth in advertising is very important to me and while you may be truthfully representing your clothing, perhaps you should do a little less air brushing on your models.  I wouldn’t expect to see Ms. Moore looking like my son’s skateboard, but it would be nice to see something a little closer to reality and less plastic.

Don’t get me wrong, I really like Demi Moore as your spokes person,  I’m just a little surprised she wasn’t representing the store, Forever 21.

P.S.   If you’ve heard things about me from Abercrombie and Fitch, just ignore them.