The Johnson clan had carefully set up their make shift camp in the woods just on the outskirts of town.  A perfect hide out for cousins Bobby and Hank who had just returned from town after robbing the Carson City Bank.  When the afternoon lookout, Auntie Bess, came running back to camp shouting, “The cops are coming, the coppers are coming!” everyone took their places.   Panic set in when they realized that Mavis, who was supposed to wear the phony pregnancy apron, was off picking berries.  With little time to spare, Jack had no choice but to put it on himself.  He adjusted the stolen money which had been sewn into the belly of the apron as best as he could and quickly put on a shower cap to hide his bald head.  The twins played music, everyone smiled and tried to look as innocent as possible.

Kicking up dust, Deputy Weston got out of his car and headed toward this jovial group.  He saw nothing out of the ordinary until he noticed Uncle Frank holding a pot beneath the homely woman’s apron.  When he asked what the pot was for, Frank replied, “Getting ready to help delivery the baby!”  At that precise moment, a coin from inside the apron dropped down into the pot.  Deputy Weston drew his weapon and ordered everyone to put their hands up. 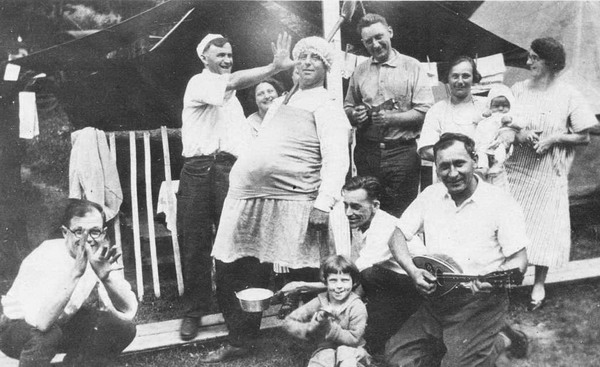