It was sixteen months ago when I wrote to Abercrombie & Fitch letting them know I was onto their ploys to try and keep me out of their store.  I also acknowledged that, much to my dismay, it wouldn’t be long before my children would be interested in shopping there.

Well, that day came last week when my 7th grader asked if we could stop in at Abercrombie & Fitch to find a certain type of pants he wanted to wear to his holiday concert.

Based upon my last experience, I knew exactly what to bring, so I switched over to my extra large handbag and scurried around the house collecting my survival kit.

Unfortunately, my 12 year old put his foot down and would not permit me to bring any of my carefully selected items.  It worried me that I would be going shopping, vulnerable to having my senses accosted.  The things I do for my boys.

Entering the store, I was immediately engulfed by a cloud of cologne which vibrated against my head as the music pounded with a heavy bass beat.  I shouted to the sales girl that we were looking for colored chinos.  She pointed to the back of the store and shouted back that they were in the clearance section.  Instead, she probably should have told us to head due south and given us a compass because within three steps I was lost.  The store is set up like a labyrinth with 8 rooms that connect in the far corners.  You must navigate through the dimly lit rooms, around tables with stacks of T-shirts and jeans while being super careful not to walk directly into a wall sized mirror that you might mistake for being the next room.  I would also recommend wearing soccer shin guards for those low tables that you might not see.

Dear reader, as a public service, I plotted the course just in case your son wants a pair of bright green pants too.

From the entrance, walk 3 paces left, 5 straight, 3 right, two forward, 4 left, 3 forward, 5 right, 4 forward, two left, 3 straight, two right, 7 straight and one left.  This should put you directly in front of a stack of 14 pairs green chinos on a shelf that is 7’ high and totally out of reach if you are not Magic Johnson.

I left Nik standing   below the pants pile and ventured off to look for help.  Within 12 steps I was lost again and called out to Nik making my way back via the sound of his voice.  I began to think that the store staff is required to stay at least 15 feet from anything with a sale tag.  Sale = No Assistance.  After several minutes I gave up and climbed on a display and tugged on the bottom pair, which brought the whole stack down into Nik’s arms several feet below.  It was like he was a fireman catching a baby being dropped from a burning  building….at night….in the fog.

Nik loved the pants and we set out to find the register which was in room 6.  Had I thought ahead, I should have left a trail of breadcrumbs from the front door to aid in finding our way back.   Once in room 6, we stood at the register with not another person in sight.   After waiting and waiting, a girl wearing a head set waved to us from room 8.  I could see her speaking into her head set and within a minute or two we were greeted by a cashier who I swear just stepped through the mirror in room 5.  Nik’s $79  pants were marked down to $29.  That’s $50 worth of help we were not entitled to, which explains a lot.

With the transaction complete, Alice in Wonderland handed me the bag and off we went.  “Head for the light”, I told my son.   Soon we were out of the mall breathing fresh air again, swinging the bag containing our purchase all the way to the car.  Since it was so dark in the store, I had no sense of what the bag looked like until we got home. 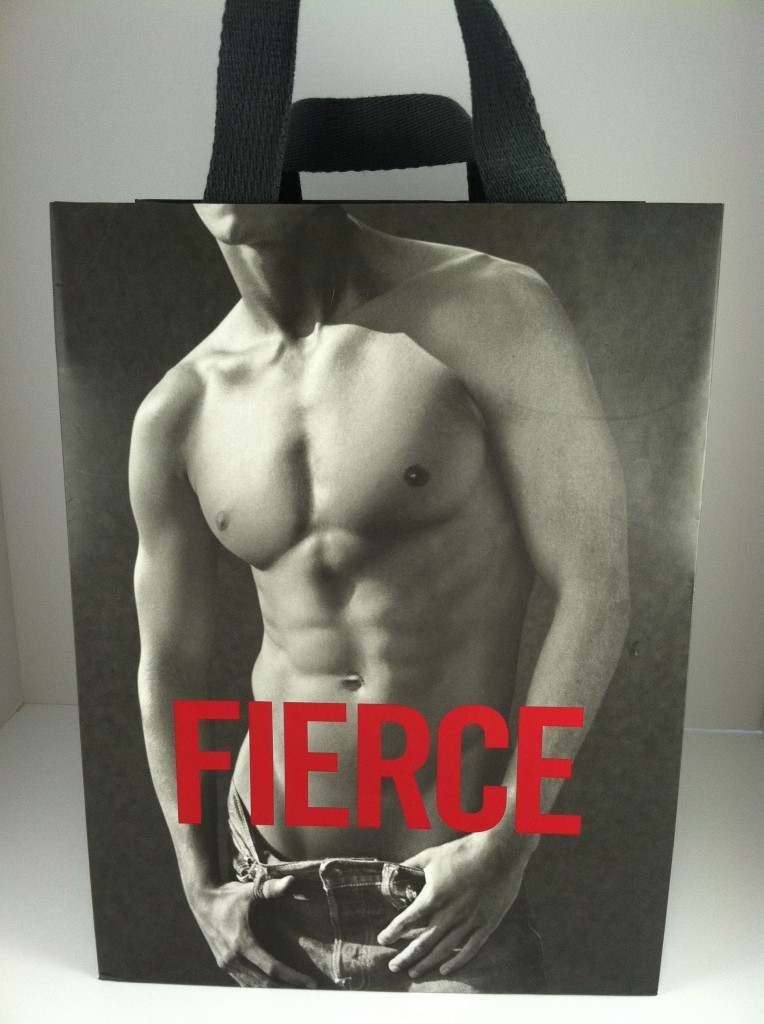 Wow, that was kind of embarrassing!  Probably more humiliating for Nik because I handed him the bag to carry as we exited the mall.    Had I known the bag was going to look like this, I would have come prepared.  Back in my art studio, I had been making paper dresses out of maps and could have totally whipped up a shirt to slap on the bag before we left the store. 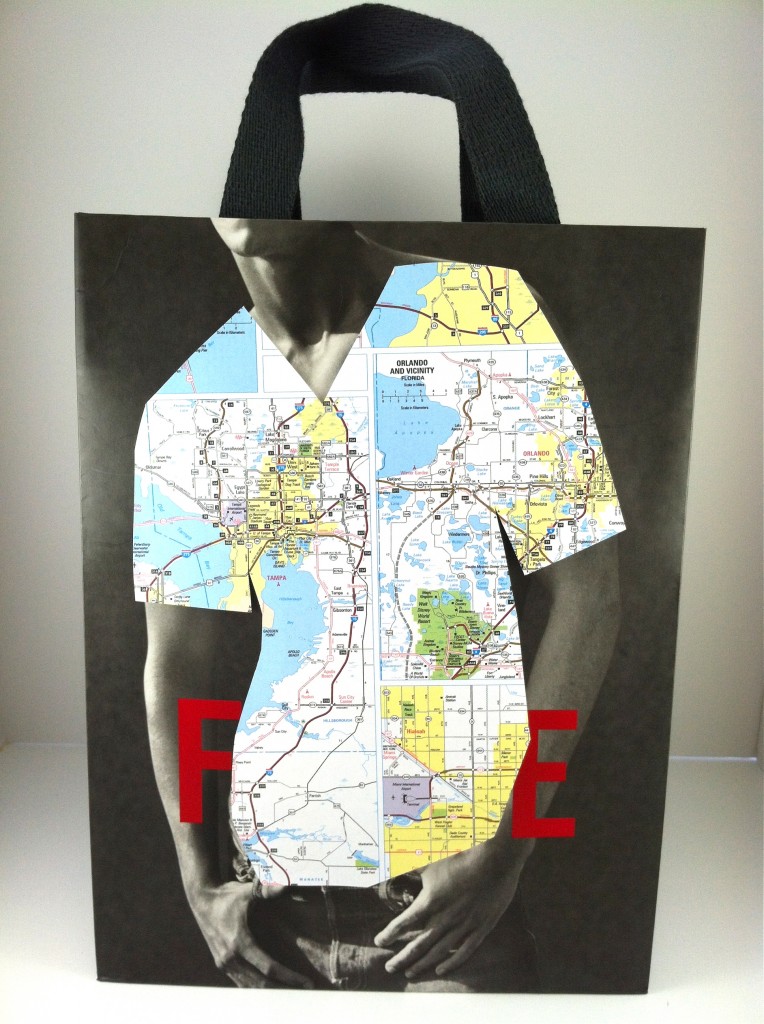 Ohh, the light bulb just went off in my head again!

I’m going to open an Etsy shop where I can sell the map shirts and these buttons which no doubt will become very collectable.  I’ll be sure to include a free set of directions with every purchase.