The light bulb went off in my head.

“I was trying to figure it out and then, the light bulb went off in my head……….blah blah blah.”

When I said this for the 18,616th time a few weeks ago, it was brought to my attention that perhaps I should be saying Baiersbronn the light bulb went on in my head.  After a moment of pause, I practically curled up in the fetal position with the thought that I have sounded like an idiot over and over again.  The following, is a story about patience and waiting for that light bulb to go off….or on.

If you’ll climb aboard the Way-Back machine, you’ll find me back in 1989 in Huntington, NY making a paper mache dog just for fun.  I formed its shape with a coat hanger and used newspaper to build out the body.  I coated it with paper mache and set it to dry.  Well, it sat drying for 23 years in one basement or another as I moved from this house to that one.  With each move, I would pat her on the head as I put her into a packing box, telling her that one day it would come to me what I needed to do to finish her. 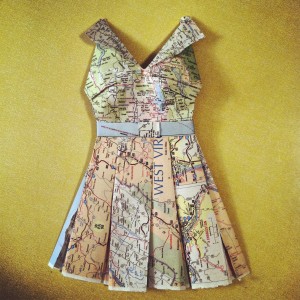 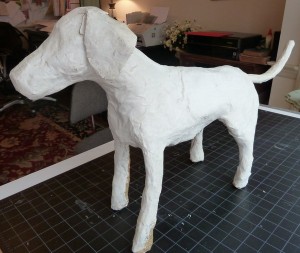 Early this November, the light bulb went off in my head while  folding an old map into the shape of a dress.  Wouldn’t my little dog look fabulous if I covered her in maps?  Yes!  I brought her up from the basement and went to work right away.

Here she is during her transformation using an old atlas, a paint brush and Mod Podge glue. 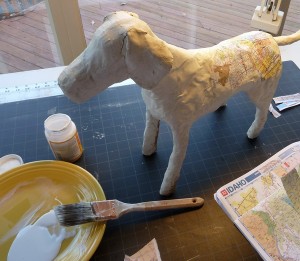 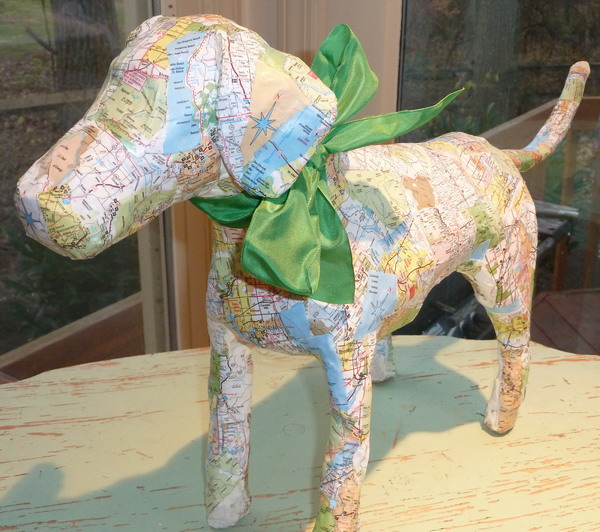 I still have a little bit to do on her legs and then she’s ready for display.  What shall we name her?

As a creative type, I found out early on in life, that patience is a key component to my success.  As a child, many moments were spent in tears of frustration when I would rush to finish up a project only to make mistakes.  I didn’t understand that sometimes you need to let your ideas simmer.  Sometimes even for 32 years.

Back to the light bulb.  It turns out that my friend’s parents, who also originate from New York, say the light bulb phrase the same way I do.  Her father even went as far as to explain that the saying refers to a flash bulb going off.  While this makes me feel a lot better, I am still considering saying the following on my 18,617th time.

The flash bulb went off in my head…